Puddles the Duck Before MS

I was fortunate during my stay in Eugene, Oregon, (1990's) to be the part of Puddles the Duck for many community events. Here we are in Portland, Oregon, opening a new Bi-Mart store. It took a bit of practice to walk around in those giant duck feet. In fact this older Puddles was much bigger and clumsier than the newer, push-up peddling Puddles. And whew! I could never have done those push ups even prior to MS...

I was nicknamed "Disco Duck" by veteran announcer and "Voice of the Ducks", Jerry Allen. Before he retired he was the play by play announcer for the Ducks and we often appeared in public together. I liked to dance. Thus Puddles liked to dance.

I worked at an ad agency and for several start up companies at the time and gave frequent guest lectures at University Oregon at the Journalism school and the MBA program. I was on the list to become an adjunct professor. Loved working with university aged folks. But then I was called away from Oregon and not much later became devastated by the MS. Life changed and here we are! 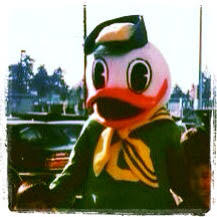